The Promise is a 100% faith-based ministry that travels nationally sharing the message of Jesus Christ in song and the words of our testimonies.  The group is out of Nashville, Tennessee.  Formed in 2010, the group is now in its 9th year of ministry.   They are called The Promise because they sing about the GREATEST PROMISE…JESUS CHRIST.

They have appeared on TBN, at Dollywood, the Kentucky State Fair. Their Daywind Recording Group radio releases all appeared in the top gospel music charts, scoring a #1 and a PIC HIT with Kyla Rowland’s REPAIR THE OLD ALTAR Their first single, I GO TO THE ROCK was #3 on Music to Radio charts and has been played internationally.  The Promise Trio won the NQC in 2012 and have made multiple appearances at the NQC.  In 2013, they were a top 10 Diamond Award Nominee for Horizon Award.  2018, the won the Crimson Music Awards -Best Vocal Group.  While all of these are blessings, the greatest blessing is sharing the message of Christ.  This is the reason they sing! 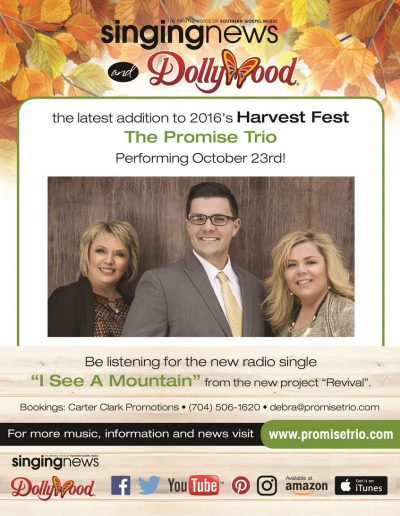